Okay, so I feel like I am entering the Blog Confessional Booth, so here goes.

Bless me, Blogfather, for I have sinned.  It has been six months to the day since my last post. (OOOOH, that sounds dreadful!) 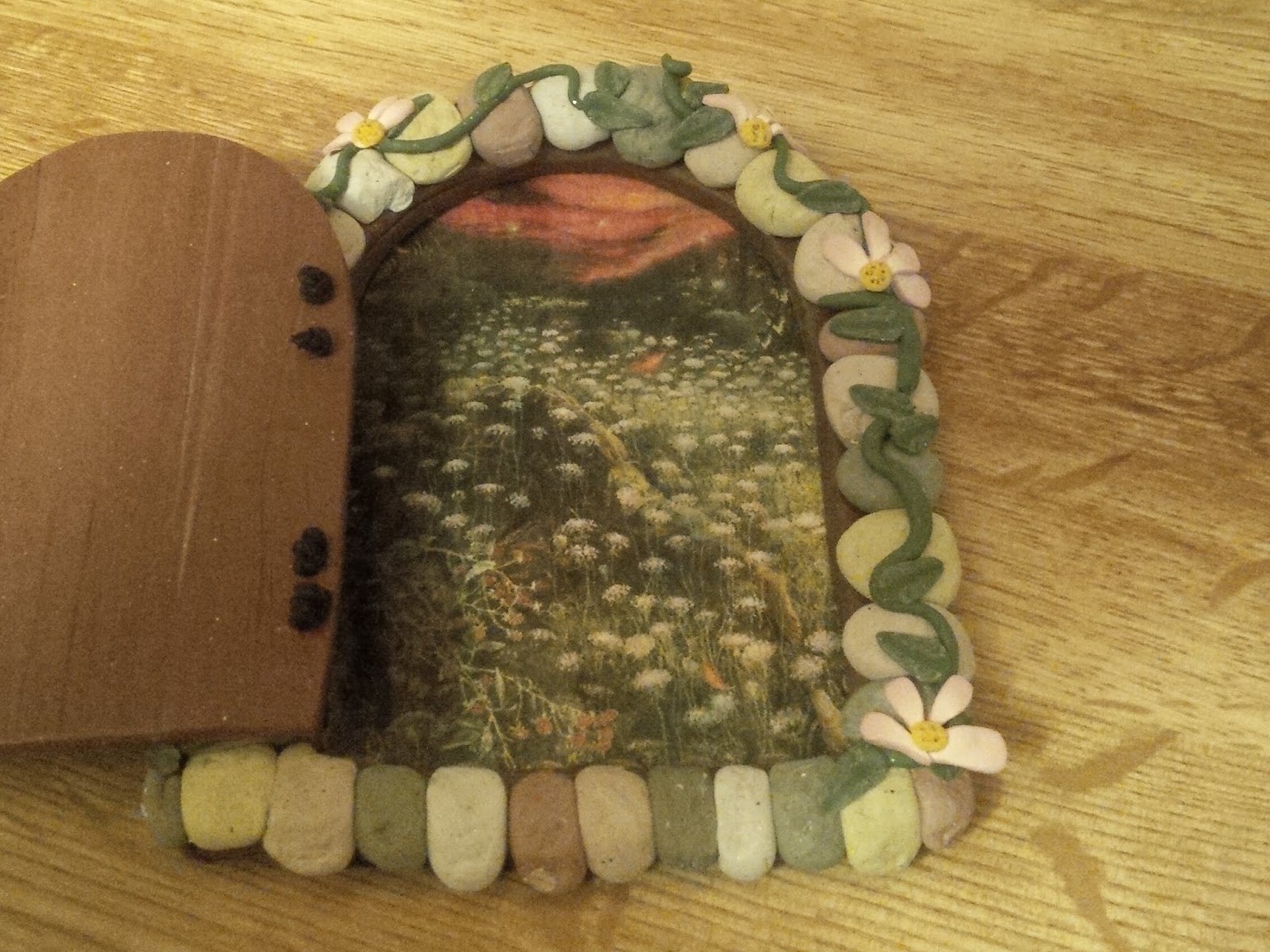 Okay now, with all that out of the way, I will post a few of the things that I have  been up to.

First, now that school's out for summer, I have been able to  clay away.  One of the things I made on a rainy weekend, and there have been many this year,  was a group of fairy doors.  It took me three tries to figure out how to work the hinges so that the door opened fully.

I had seen this on a tutorial, but of course I didn't follow the exact steps and changed it a lot, especially the way the hinges were.  Instead of using metal hinges, (which I have somewhere but can't find) I went with some black cording and put it through holes I drilled through the stonework and the door.  For the picture, I used an inkjet print that I lacquered on both sides, so that it would be waterproof (I hope)...

The other doors that I made, are similar, but the doors only open part way.  You can still see the fairy scene inside, but I tell people that these doors only open wide enough for very small fae to enter, and to keep the big bad trolls out!  Works for me.


Since the 25th of June, each Wednesday we have gone to Kenora, Ontario to participate in the Farmer's Market there.  It's quite a drive (two hours) but it is a lovely one, with outcroppings of the Canadian Shield interspersed with lovely lakes.  Kenora itself is on Lake of the Woods, and is a beautiful resort area, although lots of folks live there year round.  Sadly, the originator of the market passed away two weeks ago, but the market carries his name and it is sure to carry on for many years to come. 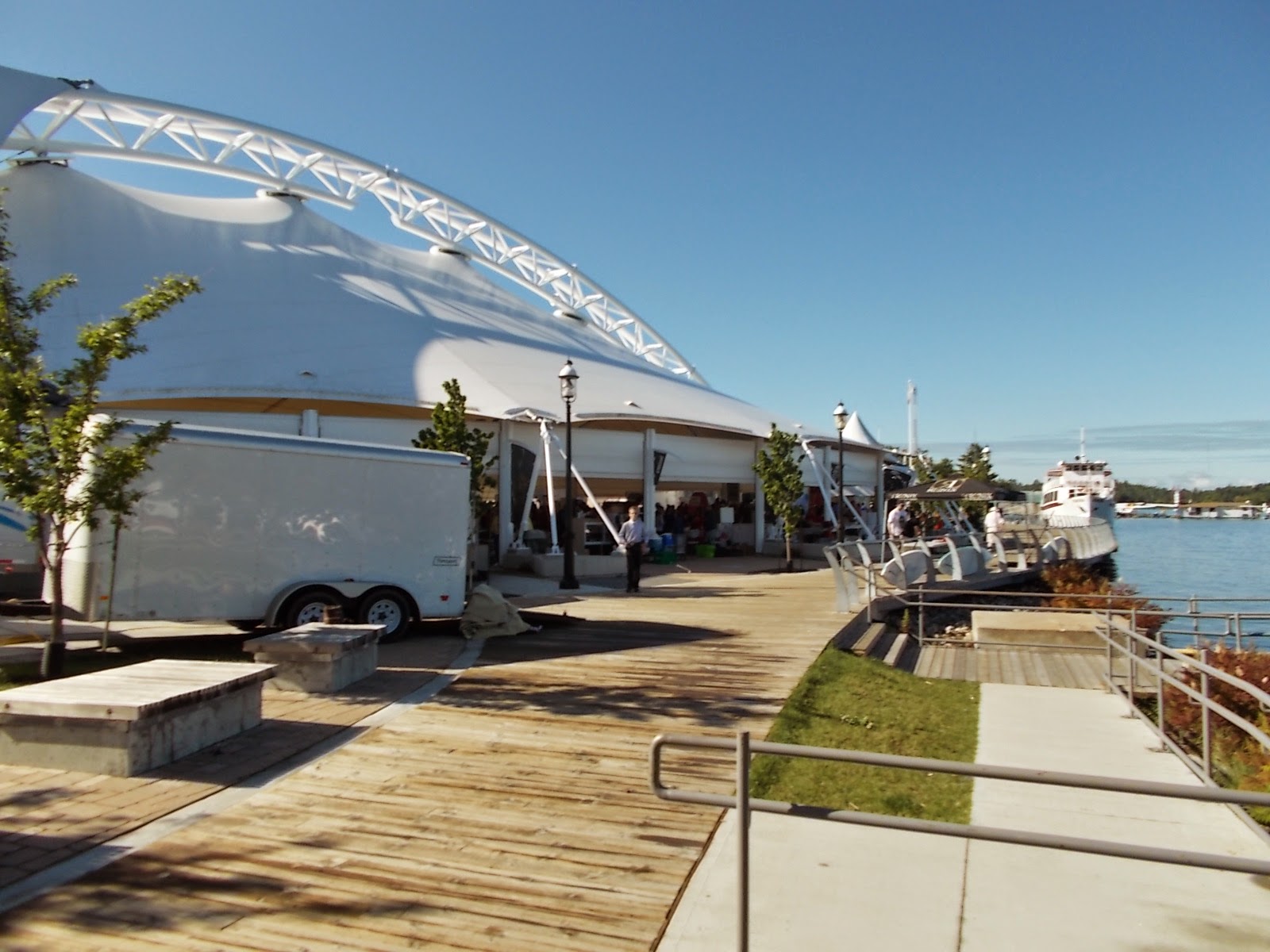 This is the actual site along the dock, which is right in the center of the city.  The big covering has sides that can close up should the weather become too inclement.  It was almost necessary to close the sides last Wednesday as I was located right by the dock.  The wind was playing havoc with my stands and we had a slight mishap with one of the Ikea metal folding screens tipping, but fortunately nothing broke.  The polymer is really strong and I don't worry about the hanging things on the screen, because they are actually meant to be out in the elements. 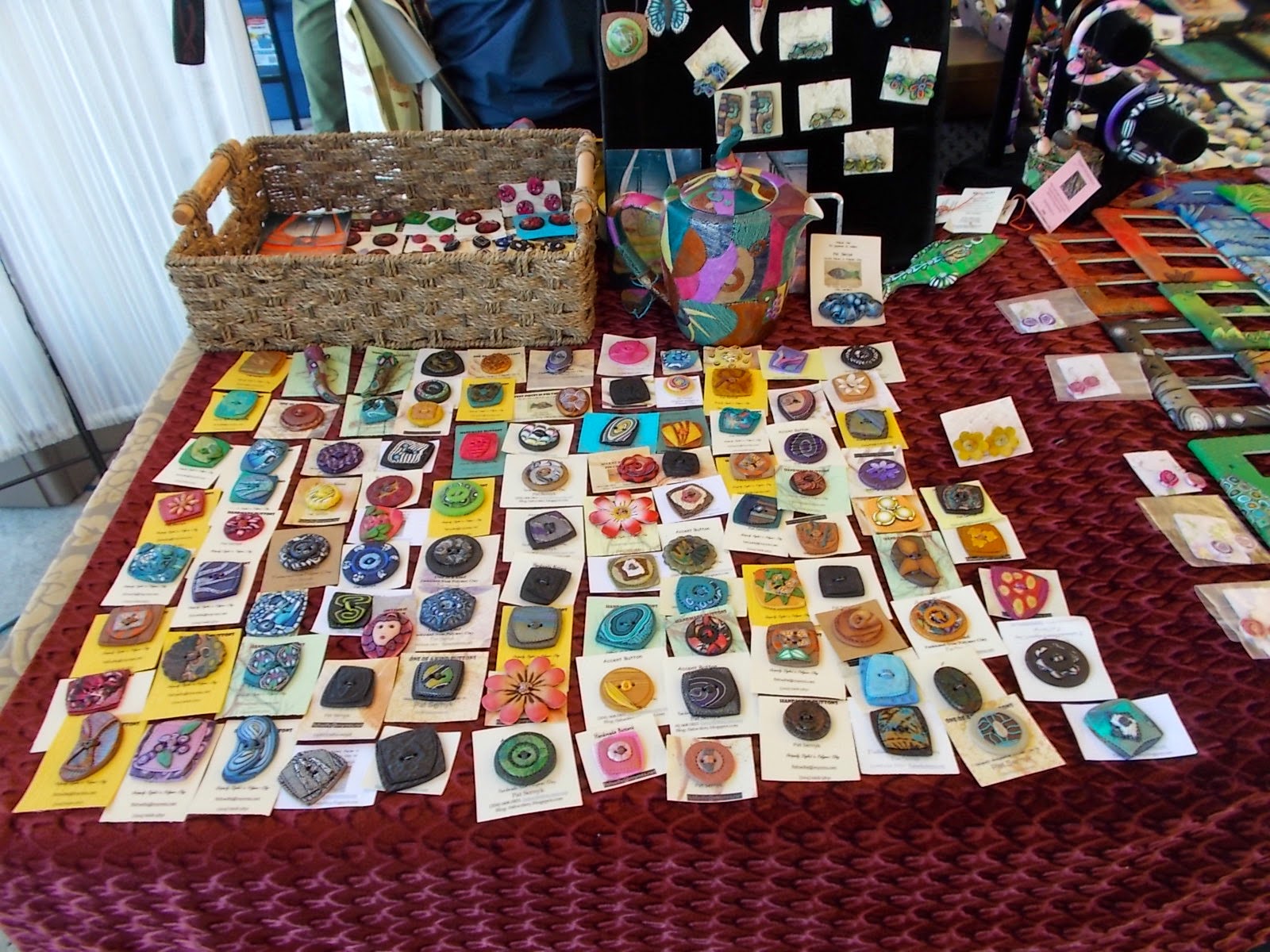 Here are a few of my buttons, and some light switch plates.
This past weekend, it rained (again) and the wind blew like crazy.  So, once again, I had a little time to 'play' seeing as how our planned barbeque was not going to happen.  While I was waiting for my hair to dry, I selected a random magazine from my collection.  It was the first edition of "Expression"...sadly that publication has ceased to exist.  In it, I found a project by Vesta Abel, and fortunately, I had the requisite supplies so I gave it a try.   Of course, I changed the technique to suit my style of claying, but I did use her suggested grape vines (which I had selected from our backyard vinery some years ago) and also this incredible handmade paper that I have stashed away in my paper room.  (You wouldn't believe what a paper person I am...that goes a waaaay back to when stationery had its own 'department' at Eaton's!)  Maybe that explains my infatuation with handmade books--it certainly isn't the reading part, lol.  In any case, here are two of the stick persons that I made yesterday: 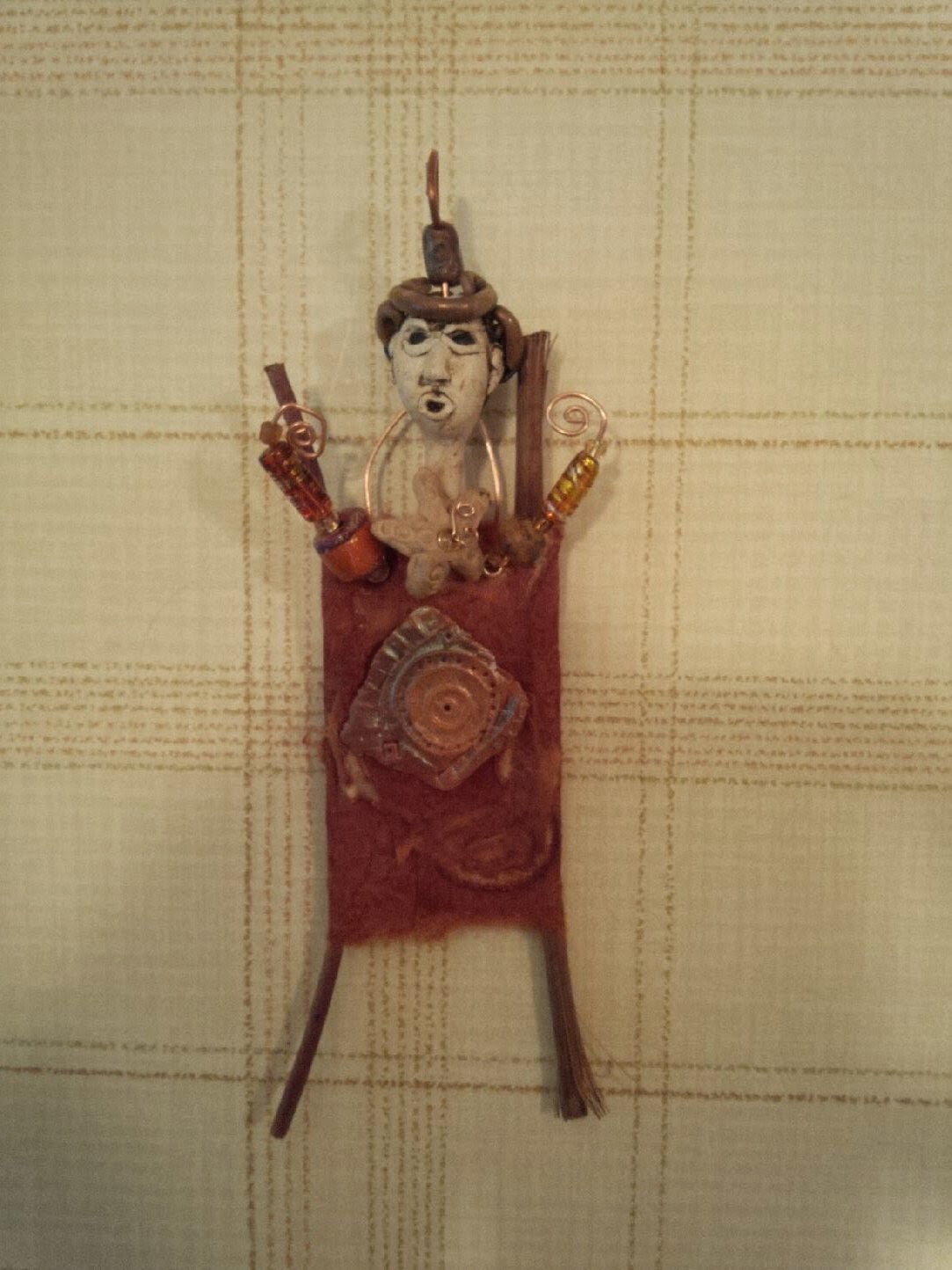 The above creation reminds me of Ringo...maybe that's why he has a 'starfish' (thank you Cindy Leitz) around his neck. 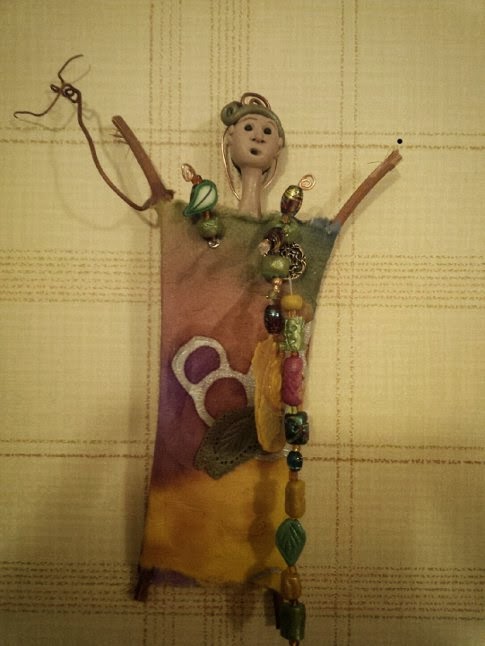 This one, I've called "ADAM", with apologies to our next door neighbour.  It's because of the position of the polymer leaf that's affixed to a certain region of this guy's anatomy, "EVE"n though he's fully clothed.  If a person were to hang these on a window, they are 'good' on both sides, even though I haven't photographed the obverse sides.
Well, I am hoping this admittance is an acceptable act of contrition...and hopefully, it won't be another six months until my next posting.
﻿
Posted by Pat Sernyk at 8:47 AM

Welcome to this and that, and mostly polymer clay!